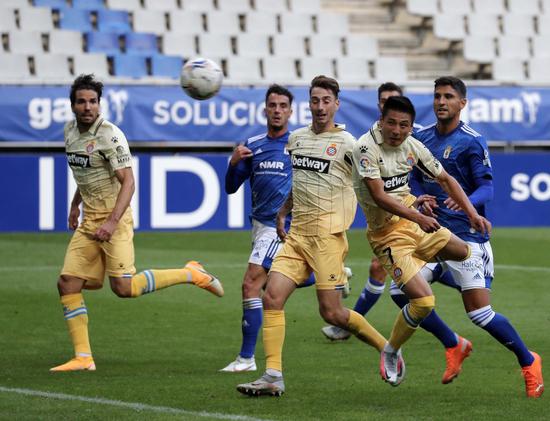 On October 1st, the National Day and Mid-Autumn Festival gathered together. Chinese player Wu Lei, who played for the Spanish second team, specially recorded a video to send blessings to the motherland and fans. In the fourth round of the Spanish League on October 4th, Beijing time, the Espanyol will challenge Sabadell on the away game. Many Chinese netizens left a message: "Wu Lei used his mouth to send blessings before the game. We are even more looking forward to his good performance on the court and send a holiday gift package to Chinese fans with his feet."

In the past three rounds of La Liga, the Espanyol has 2 wins and 1 tie, scored 5 goals and lost 0. The overall state is not bad. Among the team's 11 starting players, Wu Lei's position is relatively stable. Wu Lei is more active on the left wing, kicking a left winger, but he has the opportunity to resolutely penetrate the penalty area to find a goal. In the first 3 rounds of West Division, Wu Lei all started, with 1 goal and 1 assist in the first game. Although he did not score in the next two games, he created a goal. However, in the 60th minute or so, Spaniard coach Moreno will habitually replace Wu Lei.

The strength of the Spaniard's opponent Sabadell in this round is relatively average. Recently, they suffered two consecutive defeats, scoring 1 goal and conceding 3 goals in 3 rounds. The league's average offensive and defensive strength of 0.5 goals and 1.5 goals per game has made Sabadell on thin ice in this campaign.

If Wu Lei gets a chance to start, there is good news: Sabadell is one of the few teams in the Spanish League to use a 352 formation, and the gap between the two ribs is relatively large. As long as Wu Lei can make use of his excellent running position and fast starting speed, he may be able to perform relatively well.

The Spaniard played against Oviedo in the last round. Wu Lei had multiple shots and one shot from the front, which unfortunately hit the post. In the 60th minute or so, Wu Lei was replaced by the team's most valuable forward De Thomas. De Thomas then scored a penalty and a steal, and scored twice to help the Spaniard win 2-0. However, De Thomas recently changed his agency, and players have been deeply involved in rumors of leaving the team.

When sending this blessing, Wu Lei had a bright smile on his face. Perhaps, Wu Lei had lived alone in Spain for 3 months before, while his family and children were in Shanghai. Now that the whole family gathers together, Wu Lei feels very happy.

Wu Lei’s personal social platform "Wu Lei Zhou Ji" revealed, "My family returned to Barcelona this week. Before they arrived, I took the time to tidy and clean the house. Fortunately, there are finally people returning home from training. I can cook for me. I haven’t seen the children for three months, and I was inexplicably moved when I saw them. I was very warm when I was with them after dinner, whether it was lying on the sofa or going out for a walk. Children. They have all grown up and become more sensible!"

Wu Lei said bluntly, as a professional athlete, from childhood to adulthood, either closed training, or went out to play games, rarely spend the Mid-Autumn Festival with his family. "But in a foreign country, it still feels different. Mid-Autumn Festival and National Day this year happen to be the same day. I have been outside for a long time, and I really feel a lot of difficulties. Whether it is football or country, you can only get it if you are truly strong. The respect of others. Bless our motherland to be stronger."

Benitez, the world-famous coach who coaches the Chinese Super League team Dalian, said in an interview with Xinhua News Agency that China needs more players to go to Europe to play, and even to play in the five major leagues, can Chinese football improve. He also specifically named Wu Lei by name: "You still need time to do this, because the level (of the five major leagues) is too high. The Spaniard's Wu Lei is an excellent player, but his team is downgraded. You need more Many players go abroad to play and can play in the second league. These players can return to China to become coaches in the future."

On October 1, the Japanese men's national team announced a new roster. Affected by the epidemic and international policies, the 25 players trained by the Japanese team this time are all overseas players who played in the European League. This list is full of stars, with effective Ligue 1 Marseille’s Nagatomo and Sakai Hiroki, Serie A’s Sampdoria’s Yoshida Maya, Premier League Liverpool火狐体育官网’s Minano Takumi, and La Liga’s Villarreal’s Kukanei , Shinji Okazaki of La Liga Huesca.

Japan’s men’s football team is currently ranked 28th in the world and first in Asia. They will play against Cameroon and Ivory Coast in the Netherlands on October 9th and October 13th. Coincidentally, the Chinese national team, ranked 76th in the world, recently announced a new list. Naturalized players Browning and Fernando were selected for the first time. Wu Lei, who has studied abroad, has not yet been recruited. When Japanese overseas players can fill up to 23 places in a team, Chinese football has only Wu Lei fighting alone. This is also the truest portrayal of the difference in football strength between the two countries.

Wu Lei’s original contract with the Spaniard expires at the end of this year. If he chooses to live a comfortable life, he can return to the Super League, so that he has more income and a better position. However, Wu Lei, who insisted on pursuing the dream of studying abroad, chose a more difficult operation. He and the Spaniard renewed his contract until 2024, expressing his unwavering determination to study abroad. Although the Spaniard team has no superstars, the whole team can be twisted into a rope and play more like a whole. Wu Lei and his teammates must have the same ideas: work hard and help the team return to La Liga as soon as possible.